Steam trains have long captured the hearts of the American people, including adults and children alike. They are not only impressive, but they represent a level of ingenuity that set America apart from its competitors as far back as the early 1800s. What is the most famous American steam train? There’s plenty of debate, but one thing is for certain – there’s never been anything in railroading as fascinating and as captivating as steam locomotives.

What is the most famous American steam train? In terms of locomotives, there are two contenders: The Yellowstone and the Union Pacific Big Boy No. 4014. When it comes to operational steam trains, only the Union Pacific Big Boy No. 4014 continues to operate as a steam-powered freight train. However, there are numerous steam trains that continue to operate all across the country as scenic tourist activities.

There have been dozens of famous steam locomotives throughout American history. The top five are as follows:

The Union Pacific Big Boy is one of the most popular and most captivating steam locomotives that has ever existed anywhere in the world. The first of 25 of these massive locomotives was delivered to Union Pacific in 1941, and they weighed an astonishing 1.2 million pounds. They were so long that they had to be articulated – which essentially meant they had to have hinges – in order to fit around some of the nation’s curvier rail lines.

In May 2019, Union Pacific restored No. 4014 and relocated it to Cheyenne, Wyoming where it still operates today! Its second inaugural run celebrated the 150th Anniversary of the completion of the Transcontinental Railroad – one of America’s crowning achievements. Prior to its initial retirement, it had traveled more than a million rail miles over more than 20 years in operation.

Unfortunately, none of the original Northern Pacific or Southern Pacific Yellowstone examples were preserved, though there are three of the Duluth Missabe and Iron Range locomotives on display in Minnesota.

This lovely steam locomotive is often referred to as the “Spirit of Roanoke” or the “Queen of Steam,” and it’s yet another example of a locomotive that captured the hearts of millions. It was donated to the Roanoke Transportation Museum in 1959. It was originally a coal-fired locomotive, and it was the single most advanced locomotive in terms of its performance, design, and build than any other like it. Huge steam engines notoriously caused extensive damage to rails, and it was specifically designed to reduce that damage.

The No. 611 was the 11th out of 14 Class J steam locomotives like it, and it is the only survivor. Its voyage from Birmingham, Alabama back to its birthplace in Roanoke was quite the event, and people gathered from all around the country just to have an opportunity to see the 611 pass them by under her own steam power back in 2015. If the Big Boy was the largest and the J class was one of the most-loved, the K4s Pacific was the most successful. Between the years of 1914 and 1927, 425 of them were built. They weren’t very large in comparison to the likes of the Big Boy, but they were especially efficient – at least for a steam locomotive. They were used to haul passenger trains for the Pennsylvania Railroad, and they did a fantastic job of it for nearly 15 years. For a while, a K4s stood as Pennsylvania Railroad’s monument at Horseshoe Curve, but it was later moved to Altoona, PA and put on display at the Railroaders Memorial Museum. 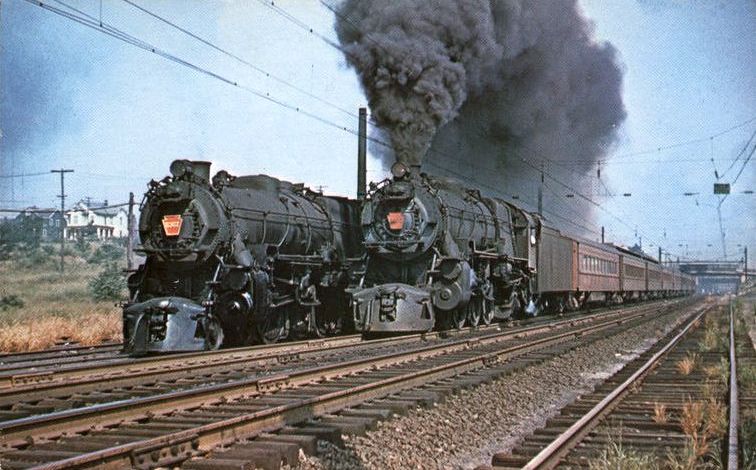 The Central Pacific Jupiter (or the Central Pacific Railroad #60 as it was known more officially) is one of the most well-known locomotives in American history. It was built in September 1868 by Schenectady Locomotive Works of New York alongside Storm, Whirlwind, and Leviathan – also Central Pacific locomotives. They were built in New York, then disassembled and shipped to San Francisco. Once there, they were then towed up the river to Sacramento, where they were completely reassembled and put into service in March of 1869.

Jupiter’s big moment came in 1869, too – the same year she was put on the track. Due to a mishap with Antelope, the locomotive that was scheduled to pull the Central Pacific Railroad’s president, Leland Stanford, to the Golden Spike Ceremony, Jupiter wound up with the honors. Afterward, she continued to serve Central Pacific until 1885, when she joined the Southern Pacific Railroad System. She was repainted in the 1870s and converted to a coal-burning locomotive in 1893. Eventually, the Jupiter name was dropped, and she found her way to the GVG&N, which renamed her No. 1. She ran there until the early 1900s – a long, long life for such a locomotive. She was sold to scrappers for $1000.

O’Connor Engineering Laboratories, located in Costa Mesa, California, reproduced Jupiter in 1975 using a handbook from 1870 and scalings of photographs that were taken in 1869. You can find the reborn Jupiter at Golden Spike Historic National Park today.

Aside from simply visiting national parks to see steam locomotives that have long been decommissioned, it’s possible to actually ride steam trains in many parts of the country today! The most famous American steam train rides include:

If you’re curious, the Durango & Silverton is one of the very few remaining narrow-gauge lines left in the United States. Its tracks are a mere 3 feet wide, and they were designed that way to make running the track along the Colorado Rockies more affordable thanks to shallower paths carved into the rock. The passenger train is pulled along by its original coal-powered steam locomotive, and it climbs a whopping 3000 feet in elevation across a 45-mile journey. If you’ve always wanted to see amazing sights from the amazing luxury of an American steam train, the Durango & Silverton is the way to go. It lumbers along at just under 20 miles per hour, and it passes some of the most beautiful sights in the Rocky Mountains.

If you’re ever in Connecticut, the Essex Steam Train is a fantastic opportunity that you won’t want to miss. This route covers tracks that are more than 150 years old. Back in the late 60s, the tracks were all but destroyed; they’d been abandoned and simply left to grow as passenger rail fell to the wayside for car and air travel. However, a group of volunteers stepped in to clean it up, and today, you can ride the Essex Steam Train through some of the most scenic country in New England. Fall is by far the most popular time of year for tourism, and there’s a 10-day guided tour available.

The Great Smoky Mountains are the eastern answer to the glorious Rockies of the west, and the Great Smoky Mountain Railroad is truly a sight to behold. Even the locals will tell you that if you truly want to experience the real Smokies, this trip through the wooded mountains is by far the best way to do it. The railroad has existed since the late 1800s and it used to give people who lived in the mountains a way to reach the world around them. Some of the views you’ll see include things like the Nantahala Gorge and the Blue Ridge Mountains, just to name a few. It’s a nine-day journey that shows you the best that the mountains have to offer.

The Abilene & Smoky Valley Railroad operates the former Atchison, Topeka, & Santa Fe No. 3415, a Pacific-type locomotive that runs tourist trips on a few weekends throughout the year in the Kansas area. The locomotive sat in a park for more than 40 years, and it was later restored. This (2022) is the last year to ride the rails before the No. 3415 is once again taken off the tracks for restoration, and the track is expected to be refurbished while she is undergoing repairs.

Labor Day and Memorial Day are the railroad’s two biggest days, and you can catch rides through late September and early October of 2022 for the annual Heritage Celebration in Abilene, too.  After this year, she is likely to undergo renovations for at least two seasons, but the exact timeframe is unknown.

The Cumbres & Toltec Scenic Railroad carries passengers between Antonito, Colorado and Chama, New Mexico. It’s a stunning route that takes riders over streams, past all kinds of wildlife, and even through some tunnels before heading across a very long trestle bridge that makes some people slightly nervous. At the top of Cumbres Pass, the train reaches an elevation of 10,000 feet – the highest elevation of any steam-powered train in all of North America. It’s also a narrow-gauge railroad, and it claims to be the largest fleet of narrow-gauge locomotives in the US, too. 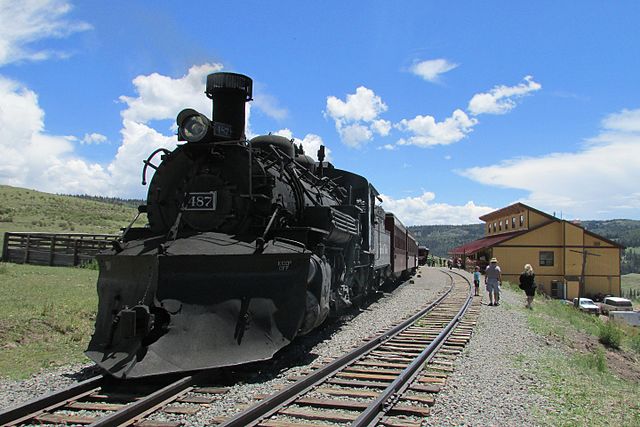 The Grand Canyon Railway is quite possibly the single most famous steam locomotive ride in the entire country due in part to its location at the iconic Grand Canyon National Park. The ride is a very long and very impressive 65-mile route that starts in Williams, Arizona and travels to the South Rim of the Grand Canyon. From start to finish, you can expect the ride to take a total of four hours round trip.

This railway offers multiple service classes depending on your budget and preferences, including coach class, luxury parlor class, and others. The latter offers a private bar and an open platform on the back of the car that gives riders a unique perspective of the Grand Canyon that they won’t get anywhere else. In fact, riders are very likely to see some elk, mountain lions, and other forms of breathtaking wildlife as they amble along.

If you’re ever in New Hampshire and you want the opportunity to see much of the American Northeast from the comfort of a train car, the Mount Washington Cog can provide it. Mount Washington is the highest point in the entire region, and the steam locomotive pulls riders more than 6000 feet to the very top to see everything below. On a clear day, it’s possible to see the landscape for hundreds of miles; on the best day, you can see Canada, five states, and even the Atlantic Ocean all the way from New Hampshire! It’s a very popular attraction, so if you’re interested, make sure you book in advance.

The Silver Creek and Stephenson Railroad is located in Freeport, Illinois, and while it’s only a 3.4-mile round trip, riders get the opportunity of a lifetime – to conduct a steam locomotive on their own (with guidance and supervision)! You can have the chance to conduct a 1912 steam locomotive all on your own through a part of rural America that few people ever get the chance to see. The railroad features several antique locomotives and cabooses, many of which have been donated by numerous organizations and collectors throughout the years.

Whether you want to learn more about America’s most famous steam train locomotives or you want to take a ride on one of the famous trains yourself, there’s plenty to see and do all across the country. From riding a steam locomotive through the Grand Canyon to watching the Big Boy roll down the track, America has a rich heritage in steam trains.

Continue Reading
link to How Efficient are Steam Locomotives?

Steam locomotives were the world’s first true form of mass transportation, and while they have been replaced by newer technologies in most parts of the world, they still captivate the hearts of...